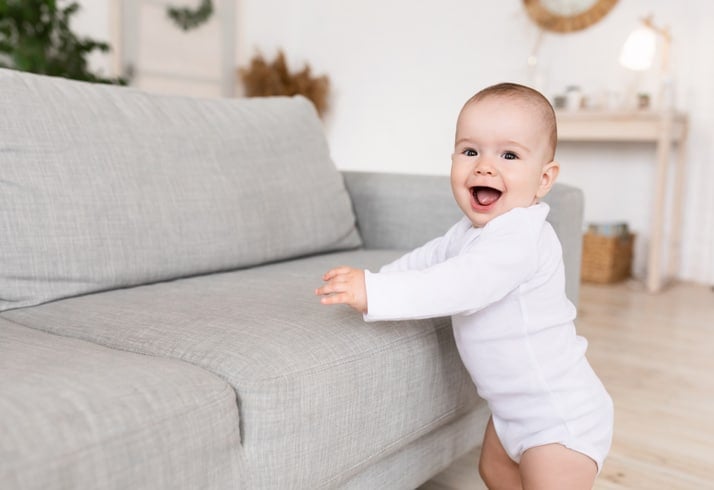 
No one wants a boring name. It’s always more exciting to come up with a unique baby boy name, one that personifies how special your son will be. If you’re looking for unheard of rarely used boy names — ones that will set your kid apart from the Liams/Noahs/Olivers in his class, we’ve got you covered. This list of 30 cool unusual, undiscovered baby boy names just might include the name you’ve been searching for.

♂ Ruler of all (German)
If you want a strong name for your little warrior, Alaric could be the perfect choice.
You may also like: Abel, Adan, Arlo

♂ Slayer warrior, little blond one (English, Gaelic)
Banning is a solid choice for parents wanting to raise a child with the heart of a warrior or a little blondie.
You may also like: Braxton, Bastien, Bowery

♂ Freckled (Irish)
This name is perfect for parents of Irish descent wanting to pass on a family heritage to their brand new baby boy.
You may also like: Bradan, Brecken, Broder

♂ Thistle (Anglo-Norman French)
If you’re looking for a name with links to nature, Carden could be an excellent option for your son.
You may also like: Carwyn, Caledon, Cillian

♂ Locksmith (English)
Claver is an attractive choice with a ton of power.
You may also like: Callen, Cohen, Cortez

♂ Descendant of the unlucky one (Irish)
Moms who choose this name can call their little guy Dev or Devi for short.
You may also like: Draco, Dario, Danil

♂ Stranger (Irish)
There’s something special about the name Doran. It’s not common but somehow sounds familiar and not entirely out there. He won’t have to worry about competing with other kids in the class when his name is called.
You may also like: Domino, Draven, Donal

♂ Prosperous protector (Irish)
Eames is a boy’s name that carries with it class, distinction, and a hint of sweetness.
You may also like: Emilio, Elkan, Ellair

♂ Ella hill (English)
For something original, why not revive old names? Eldon is originally a surname from Old English male given name Ella and dūn ‘hill’.
You may also like: Einar, Eloy, Elige

♂ Spear (English)
Garrick is a solid choice for a mom wanting to give her little boy an unusual boy name with masculine appeal.
You may also like: Galen, Giacomo, Grafton

♂ Goth staff (Scandinavian)
Gustav is a robust and dignified Old world option that is overdue for a revival! It even has the cute nickname of Gus.
You may also like: Gerlach, Gavin, Gallieno

♂ Brave one (African) #952
A unique choice for parents wanting to raise a little boy with both determination and strength.
You may also like: Jaden, Jamison, Jair

♂ Son of Alan (Scottish) #792
This name is as cute as can be, but it’s also strong and dignified at the same time.
You may also like: Keane, Kohen, Kendrew

♂ Blackbird (Irish)
This unused gem makes a wonderful alternative to Lennons, Ronans, and Logans of the world.
You may also like: Loman, Linton, Lekan

♂ Descendant of Lórdán (Irish)
While it was originally a last name, Lordan is also an excellent choice for a first name for your little Lord.
You may also like: Lathan, Lucio, Ludovic

♂ Fortunate (Welsh)
Madoc is an interesting choice as it sounds modern, but actually has Old Welsh roots.
You may also like: Mateo, Marlowe, Marcos

⚥ Jewel (Sanskrit)
Mani is usually a short form of the name Emmanuel. Shortening old names in this way gives them a modern twist.
You may also like: Mastin, Marino, Mateo

♂ Brave (Norse)
What a cool choice for parents looking to convey courage and heart when naming their little guy!
You may also like: Maksim, Mahlon, Marius

♂ Mayor (Hebrew)
Mayer name is befitting of any future leader, as it means “mayor” in Hebrew.
You may also like: Miller, Milos, Maxime

♂ Victory of the people (Italian)
It’s an excellent choice for parents wanting to honor a family member with the name Nick or Nicholas but looking to make it their own.
You may also like: Nighean, Neilan, Nolan

♂ Son of Orti (Spanish)
Ortiz can be used as a cool, modern alternative to names such as Oscar, Oliver, and Oswald.
You may also like: Okello, Otmar, Oded

♂ To blossom (Spanish)
Perez is a short and spunky name that gives us a feeling of spontaneity.
You may also like: Paxton, Paolo, Porter

♂ Advice army (German)
This is a strong choice for moms who want to give their son a name with determination and grit.
You may also like: Reinmar, Rhett, Ransley

♂ Spring (French)
One thing is for sure: it’s a unique baby boys’ name that no one else will have on the playground. It means spring, which makes it sound very lively and fresh.
You may also like: Rudo, Rosston, Rocco

⚥ Word name (English)
A word name that’s way under the radar so chances of another boy sharing your son’s name are still slim!
You may also like: Rafael, Romane, Romney

♂ Invented name (Modern)
A unique invented name that sounds real, and the nicknames Shea and Adon are super cute.
You may also like: Sully, Seanan, Salim

♂ Little hills (Irish)
A unique-sounding name, with a nod to Irish heritage, that hardly any parents are choosing.
You may also like: Torsten, Tavin, Tristan

♂ Son of Poseidon (Greek)
It’s a name full of mythological history, so Triton may be the name for you if you love Greek mythology.
You may also like: Tucker, Tullio, Tybalt

You may also enjoy:
30 Rare Baby Boy Names That Aren’t Being Used

Bilateral coordination means using both sides of the body together in a coordinated way.  Scroll down to learn more about