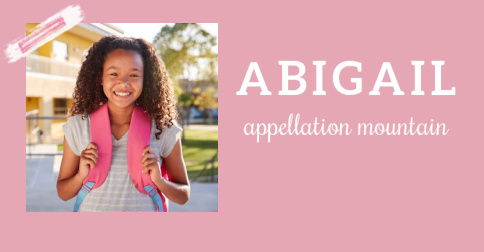 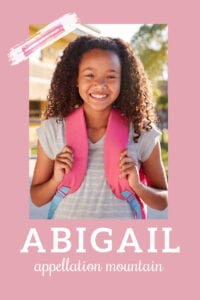 Depending on the era, the baby name Abigail brings to mind a Biblical bride, a lady’s maid, ora sage font of wisdom.

Thanks to Photoquilty and Emmy Jo for suggesting our Baby Name of the Day.

Abigail has her beginnings with the Hebrew Avigayil or Abhigayil. Avi means father, and gil means rejoice. They’re linked together in slightly different ways – father’s joy, my father rejoices and so on. The gist is this: Abigail is a daddy’s girl.

In the Bible, Abigail is also a dutiful wife. She’s married to a wealthy scoundrel – Nabal – who manages to tick off David. David’s plotting revenge when Abigail shows up on his doorstep to ask for forgiveness. It works. David realizes his plans were sinful; Nabal dies of a heart attack; and Abigail ends up marrying husband #2, David, shortly after.

The Old Testament character proves herself courageous and humble. The words she uses to persuade David are sometimes considered a prophecy – the Talmud considers her one of seven female prophets. But others suggest that she’s simply intelligent and able to understand the politics of her time.

Like many an Old Testament name, the baby name Abigail was overlooked for centuries. Unlike many traditional favorites, there’s no saint Abigail or medieval princess by the name.

You might expect the name to gain in use during the Protestant Reformation, like so many Old Testament choices. That’s true … but the story takes some unexpected turns.

Martin Luther nailed his 95 Theses to the door of a church in Wittenberg in 1517. Protestant families embraced the name Abigail during the sixteenth century. Prior to that, it was used mainly by Jewish families. In fact, in Christopher Marlowe’s 1590 play The Jew of Malta, Abigail was the daughter.

Marlowe’s play proved successful, and may have contributed to the name’s greater use.

But then another drama recast how we saw the name.

The Biblical Abigail referred to herself as a handmaid. In 1616, the smash hit Beaumont & Fletcher comedy The Scornful Lady included a loyal maid called Abigail. It seems like the latter was inspired by the former. In any case, Abigail became a generic term to refer to a female servant.

It didn’t end use of the name, though. The baby name Abigail appears throughout early American history. Abigail Williams was one of the young accusers during the seventeenth century Salem Witch Trials. In the early 1700s, Abigail Franks was part of a notable New York colonial family; her letters to her sons survive, detailing life in the city at the time.

But then there’s Abigail Adams.

The wife of second US President John Adams, Abigail is remembered mainly through her correspondence with her husband. The couple married in 1764. Their correspondence revealed her intelligence, and her husband’s respect for her opinion, despite limited formal education. The 1,200 surviving letters also give us a peak into life during the Revolution.

Their son, John Quincy Adams, would become the sixth president.

She’s proved a popular figure across the ages, particularly thanks to her writing on behalf of women’s rights. Laura Linney played Abigail Adams in the 2008 HBO miniseries, and a fictional version of the First Lady appeared in 2015 in the television series Sleepy Hollow, too. Not surprisingly, artist Judy Chicago gave Abigail a seat on the Heritage Floor in her iconic work of women’s history, The Dinner Party.

All of this makes us think of the baby name Abigail as a traditional name. Classic, even.

But the numbers? They’re not quite there.

Instead of routinely appearing in the US Top 100 with Emma and Grace, Abigail barely registered in the late nineteenth century.

From 1907 to 1938, the baby name Abigail fails to rank in the Top 1000. Only a handful of girls received the name most years until the middle of the twentieth century.

It wasn’t until the 1970s that the name really began to climb in use – and even then, it took decades.

We tend to think of Gail, Gale, and Gayle as Abigail nicknames.

But in the 1930s, it was Gail that ranked in the US Top 100. Gale and Gayle followed – and eventually, so did Abigail.

It’s worth noting that the baby name Gail might claim separate origins. It can come from the surname Gale, which has multiple meanings. One of them lines up neatly with the Hebrew word for joy.

It was a pop culture favorite in the middle of the twentieth century, with characters in movies like 1950’s Our Very Own and figures like actor Gail Russell and 1970s singer Crystal Gayle – born Brenda Gail Webb.

Chances are that Gail brought the baby name Abigail into greater use – not the other way around.

But back to fictional Abigails for a minute, because Abigail van Buren is one of the most renowned.

Beginning in 1956, Pauline Phillips began dispensing advice under the pen name, in a column known as “Dear Abby.” Pauline’s twin sister authored the similar “Dear Ann Landers” column. They would remain rivals for the rest of their careers.

Since 1987, Pauline’s daughter, Jeanne, has written the column.

While it’s faded from its spot at the top of every newspaper, we still think of Abigail van Buren as a dispenser of advice. A little old-fashioned, maybe. But practical, sensible, and compassionate. And it’s still very much read today.

Because even if the baby name Abigail wasn’t really a vintage revival, we perceived it as such.

Besides the name’s vintage style, it also fit with another long-standing category: formal names with built-in nicknames. Madeline – in several spellings – was climbing. Gabrielle and Gabriella reduce to Gabby; every Katherine was a Kate; and all those Isabellas could be Issy or Belle. For parents who love the option of a sweet nickname or a more substantial formal choice, Abigail was an obvious choice.

But with a strong and sensible vibe, and the approachable nickname Abby, the name’s success seems logical. It’s a sister for Eleanor, an alternative to Margaret or Emily. And while it’s been popular for ages, it still manages to feel timeless and traditional, too.

What do you think of the baby name Abigail?

Bilateral coordination means using both sides of the body together in a coordinated way.  Scroll down to learn more about