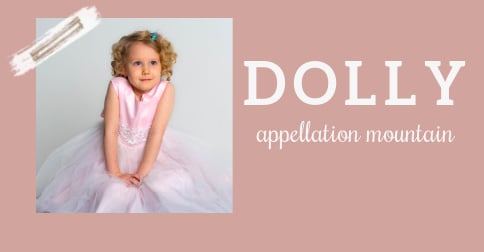 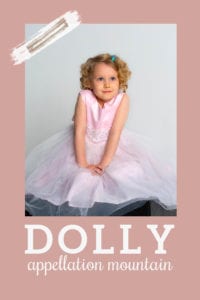 The baby name Dolly sounds easily dismissed. But the women who have worn it make Dolly a powerhouse.

Thanks to Nell for suggesting our Baby Name of the Day.

Dorothea traces its history back to the early fourth century – at least. Like Theodora and Theodore, it comes from the Greek and means gift of God.

Dorothea became Dorothy in English, and eventually, Dolly developed as a go-to nickname.

How do you get Dolly from Dorothy?  The same way Sarah gives us Sallie and Harold leads to Hal. Once upon a time, substituting L-for-R was common practice. With nicknames like Molly and Polly in use, Dolly would’ve once seemed like an obvious choice.

BUT WHAT ABOUT THE TOY?

Still, why would parents name their child after a plaything?

Turns out it’s the other way around.

The Dorothy nickname eventually became something of an affectionate nickname, like Sweetheart or Honey circa 1600.

Give it another century or so, and dolly was a toy.

Children have played with dolls for aeons, but in English, we used to call them poppets. Or babies or mawmets.

Today, of course, doll is more than just a noun. You can also “be a doll” and “get dolled up.”

So while it’s tough to separate the baby name Dolly from the children’s toy, it’s not so different from the way lots of common names – Jack, Mark, Chase, Gage, Belle, Rose – also appear as words in other contexts.

The baby name Dolly spent some time on the charts, too, as an independent given name. It never reached much higher than the upper 200s, and left the charts entirely after 1971.

But odds are that some of those Dorothys were Dolly – at least some of the time – making this name far more common than the numbers suggest.

The most famous fictional Dolly comes from an 1835 one-act comedy called A Day Well Spent by John Oxenford. It looks like he called the “adventurous lady” in the tale Harriet.

Adaptations followed, but by the time American author Thornton Wilder got his hands on it, the main character in The Merchant of Yonkers was the beguiling Dolly Gallagher Levi.

This Dolly is a widow of a certain age. She knows her own mind, and she’s adept at arranging things. The heart of the story is Dolly’s penchant for matchmaking. But this time, she’s matchmaking for herself – well, and a few other friends along the way.

Eventually, it became a 1964 musical titled Hello, Dolly! And that is the one that goes down in the history books. It won ten Tony Awards, including Best Musical. The original cast recording was a hit. So was Louis Armstrong’s rendition of the title song, “Hello, Dolly!” It hit #1, bumping the Beatles off the top of the charts.

In 1969, it became a movie starring Barbara Streisand, and the story was the same – plenty of Oscar nominations, including three wins, one for Best Score.

As a name, Dolly feels lighter than these heavy and formal choices – but that makes sense for the story.

Besides, when Wilder named the character in 1938, Dorothy ranked in the Top Ten. The baby name Dolly – and Dollie – charted in the Top 500.

It’s possible that the baby name Dolly had something of a bold, adventurous reputation long before anyone sang a note of the now-famous song.

In the early 1800s, Dolly Peel worked as a smuggler in north east England. She’s best known for sneaking aboard the Royal Navy ship her husband and son had been forced to serve on, and eventually becoming a celebrated nurse on the ship. Peel was pardoned, and became a local hero – in fact, her statue stands in her hometown today.

Born into circus royalty, aerialist Dolly Jacobs made her name in the 1970s, and later co-founded Sarasota’s Circus Arts Conservatory.

And yet, the baby name Dolly brings to mind one single figure.

Larger than life, adored by countless fans, Dolly Parton became a country music star in the 1970s. Along the way, she transformed into a living legend, a pop culture icon, and a surprisingly unifying figure. (No, really. There’s even a podcast.)

Not only does Parton boast shelves of awards, she built an entire theme park called Dollywood and set up a charitable foundation to provide scholarships and support a wide range of programs.

And if that wasn’t enough? She even made a contribution towards the research that developed the Moderna vaccine.

Her cultural impact is massive.

But since Ms. Parton wasn’t the very first Dolly we all knew, it still stops short of being a name that’s all hers.

The baby name Dolly offers a study in contrasts. It’s a nickname name, sweet and associated with the toy store.

But it’s also the name worn by some fearless, world-changing women.

If Sadie and Millie can stand on their own, and Molly is a mainstream favorite, then why not daring, darling Dolly?

What do you think of the baby name Dolly? 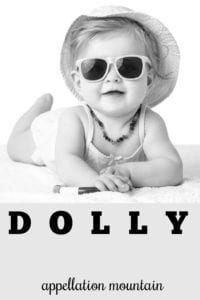 © 2021 Gwen Dewar, Ph.D., all rights reserved A preschool science experiment is an opportunity to introduce children to the

What can we do to protect our children?

Understanding the moral reasoning of bullies

Are religious kids better off?