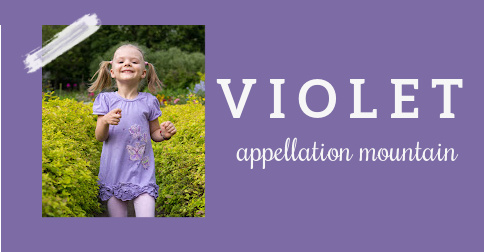 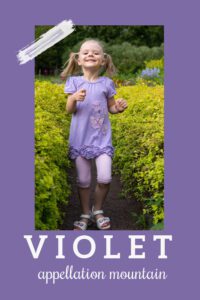 Vintage baby name Violet ranks higher today than it ever did in the past.

Thanks to Heather for suggesting our Baby of the Name.

But there’s more to Violet, The vibrant V, bright o, and -et ending give this botanical favorite a decidedly modern sound.

Back to the flower: violet is iole in Greek and viola in Latin. It became viole in French, and then violette. The plant isn’t always purple, but since the fourteenth century, violet has applied to the color as well as the flower.

It has a long history of use as a given name, tracing back to the Middle Ages.

The baby name Violet belonged to some colorful figures in the early part of the twentieth century.

Violet Jessop worked as a stewardess aboard ocean liners. She survived the sinking of the Olympic. And the Titanic. And the Britannic, too. Despite a trio of near-misses in just a decade, she continued to work on ships for years. And they called Molly Brown unsinkable …

Born Helen, but known by her middle name Violet, the Baroness Asquith was the daughter of a prime minister, a close confidante of Winston Churchill, and grandmother to actress Helena Bonham Carter.

Daisy and Violet Hilton were conjoined twins, and famous vaudeville performers in the 1930s.

Violet Wilkey was a child star in the silent film era, appearing in dozens of films between 1913 and 1917, retiring at the age of fifteen.

It’s no surprise that the name belonged to so many notable women.

Credit goes to many factors: the rise of other floral names, like Lily; our growing love of the letter V, like Victoria and middle-V picks like Olivia; and the simple passing of time that brings former favorites around again.

But pop culture has always kept the baby name Violet on our minds.

Children’s literature gives us one of the siblings in long-running series The Boxcar Children, originally published in the 1920s.

But you might first think of champion gum-chewer Violet Beauregard. She wins a golden ticket to tour Willy Wonka’s Chocolate Factory along with Charlie Buckett. The ill-fated Miss Beauregard breaks the rules and ends up as a giant blueberry. “You’re turning violet, Violet!”

There’s also Violet Baudelaire is older sister to Klaus and Sunny in A Series of Unfortunate Events. A movie adaptation followed by a Netflix reboot introduced the series to younger generations.

In early 90s television classic Saved By the Bell, a young Tori Spelling played Screech’s girlfriend Violet. And that leads us to one of the most interesting aspects of this name.

That 90s television Violet was shy – a shrinking Violet.

The phrase originally comes from the flower. While their color is vivid, in their original form, English violets often hide in the forest, tucked in with other plants.

In 2004, the world met Violet Parr, the eldest daughter of Mr. Incredible and Elastigirl in The Incredibles. She’s literally a shrinking Violet – painfully shy and able to become invisible as her superpower.

Violet overcomes her limitations and makes good use of her gifts in the movie.

The following year, America met the aristocratic Crawley family, as well as their staff when smash hit Downton Abbey debuted in the US.

The formidable Maggie Smith played the part of the Dowager Countess of Grantham, Lady Violet Crawley. She was the opposite of shrinking, an outspoken and iron-willed matriarch of the family.

Along the way, a handful of high-profile parents chose the name, including Dave Grohl of the Foo Fighters and actors Ben Affleck and Jennifer Garner.

Could it climb higher? Maybe.

With so much vintage style and grace and a powerful sound, the baby name Violet continues to appeal to plenty of parents.

What do you think of the baby name Violet? 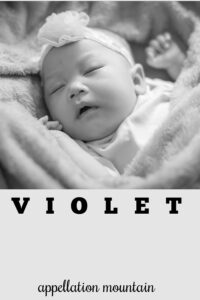 Check out our favorite kids gift ideas! Every gift on this page is a tried and true favorite of our